Foodies have followed Marcus Samuelsson’s career trajectory as far back as his job at Aquavit, where this Ethiopian-Swedish chef gained national attention. Now Marcus has his own show, “No Passport Required,” which airs on KLCS and Create.  Here he talks to us about why he wanted to do this show given his busy restaurant career, Julia Child and his favorite food places in Los Angeles.

You’re on Create and on KLCS’ Sunday afternoon schedule. What made you want to do this show?

As an immigrant and as a chef, No Passport hits two things for me, also for the fabric of the city, anytime you can tell a rich story and diverse story about food and America today. I always wanted to do that because food is a great way to get a window in to know other peoples culture that you might be familiar with it or you might not. And that’s why I think it’s great.

What made you choose this subject matter to go to different cities and spotlight immigrants?

I am American, I’m proud to say I’m American, I came as an immigrant. America has so many amazing cities and immigrants have had a major imprint of those cities in terms of music, art and food. And to be able to tell some food stories, very often a surprise story – maybe like in L.A. we talk about the Armenian community, in Seattle th Filipino community, or in Houston we talk about the West African community. And that might be a surprise, you might have been to Houston and didn’t even know there was a Nigerian community because sometimes we don’t know if we haven’t been informed about it. I’ve travel all over the world, I’ve been exposed amazing people through food and now is my time to give back and share.

What was the theme for the show?

The theme was really about telling something that is diverse and also really highlights how far we’ve come in America. That these cities that we love, whether it’s L.A. or Boston there’s proud immigrant community and there’s a journey that you may not know like in Boston we touch on the Cape Verdian, Brazilian and Portuguese and it’s overlapping. Sometimes these stories are harder because they come out of war or challenging times, but they’re also amazing. It makes us what’s American. 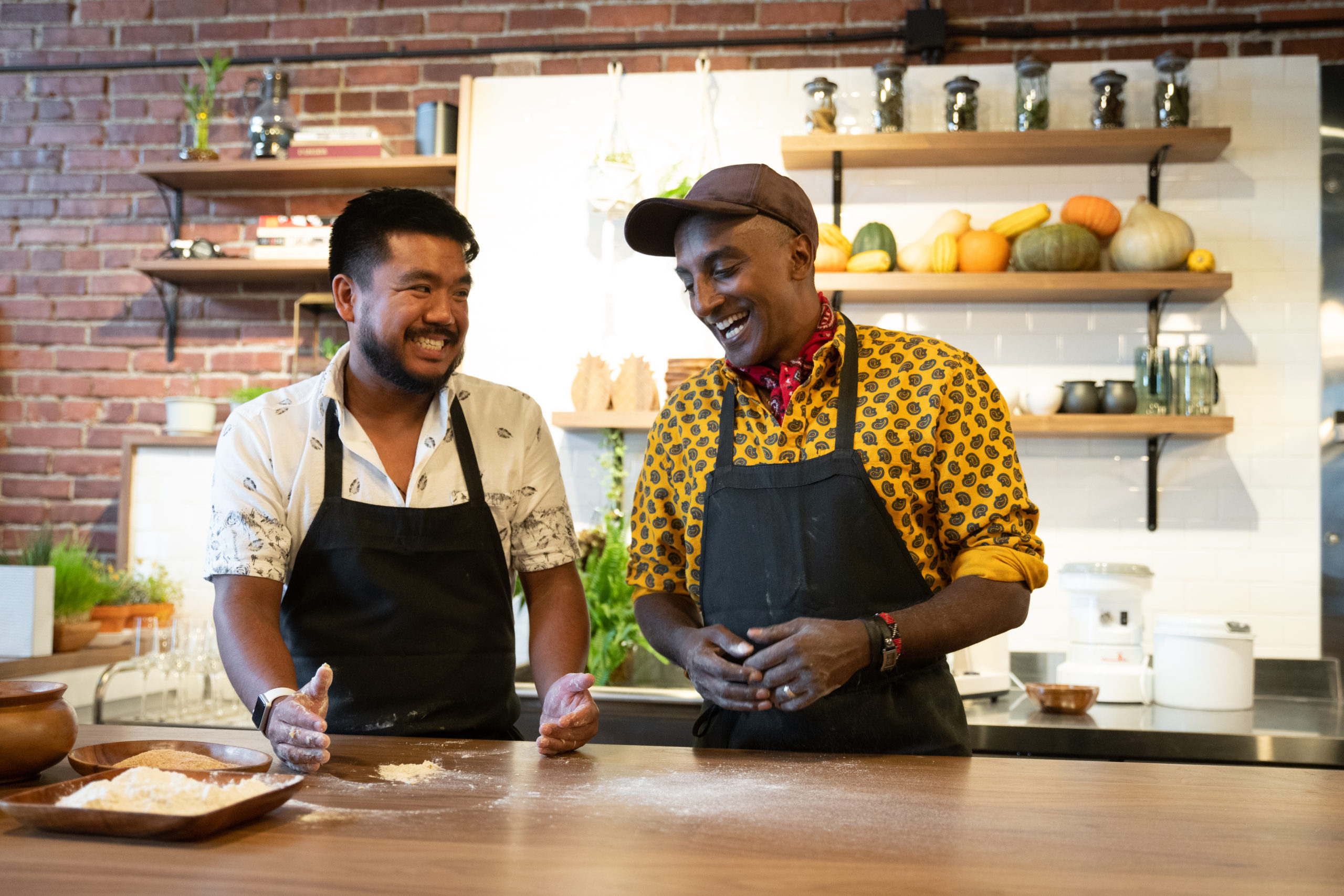 What did you learn most of all from doing this show?

I learned that people have an enormous amount of pride in their culture and they want to share they journey and story and I think these very hectic times that we have right now, where we’re very divisive, food is a way to break that down and make it a little bit more inclusive. It invites people in. So I think there is definitely a need and I think there is something that makes people excited about sharing stories. This moment needs those stories, we need to hear about the Armenian community in Glendale, because it’s inspiring, them, it’s our neighbors. And it makes me more excited when I come to L.A. I just know that little bit more information just might change my trip. I want people them to start travel within the country and explore the way the way w very often do when we go abroad.

Did you have a favorite moment filming the show around the country?

One of my favorite moments is in East Hollywood in Little Armenia about the tradition of making cured meat for 400, 500 years in a family. The fact that something that you started in Armenia as a family 400 years ago is still vibrant in L.A. today. Craftsmanship is craftsmanship. And little by little, that’s what American cities are. It humanizes ta city by seeing it through the lens of a craftsman.

This isn’t the traditional PBS cooking show. As a successful chef, you could just keep opening restaurants.

What made you originally want to do TV and, in particular, this show on PBS?

First of all PBS, for me, is an iconic American brand of trust. It really relates to education and storytelling and to be able to do that with both, to tell it in a new medium and also a traditional medium, and this show is really a dream for me because I am immigrant and I care about diversity, and to be able do that on iconic PBS and a new medium like Vox, to be able to tell these stories that are so dear to us all. Who wouldn’t want to know more about our neighbors and how we became this present diverse country. America is very, very special and it’s easy to take that for granted, especially because people are special, and people left where they came from to come to America with a vision and a dream. That is special.

What’s your favorite dish to make?

I grew up very simply, I grew up with salmon, herring, mackerel, all seafood.

What’s the most popular question you get?

People are curious around Harlem, where I live today, what it’s like to live in Harlem. Harlem is such a known village throughout the world, but still people have curiosity around that. I get a lot of questions about “What is it like to grow up as a black kid in Sweden?” My questions are very much around food, community and ethnicity.

So far, everyone’s had a Julia Child story. Do you have a Julia story or did she inspire you in any way?

First of all, I thought about Julia when we did the show. Thinking about how much she taught Americans, a fun way, but also about French food. My favorite was when she dropped the chicken, because we all have dropped a chicken. Cooking techniques that were foreign and difficult and hard to understand, she humanized that. I know America wouldn’t be as delicious without Julia Child. And she still drops the chicken better than anyone, the way she dropped the chicken? Just scratch it off and keep cooking. That’s perfect, we all want to do that. Right?

Do ever just pinch yourself you get to do this for a living and follow in those footsteps of educating people about cooking on TV?

I do, I do, for me it’s really special, first being adopted you think about how my life could have been very different. I took a chance, I had three hundred bucks and I came to America because I worked in the kitchen and to be able to do this 20 years later, it means that if you get lucky and meet the right people and they mentor you, you can live your dream and I feel lucky and blessed. 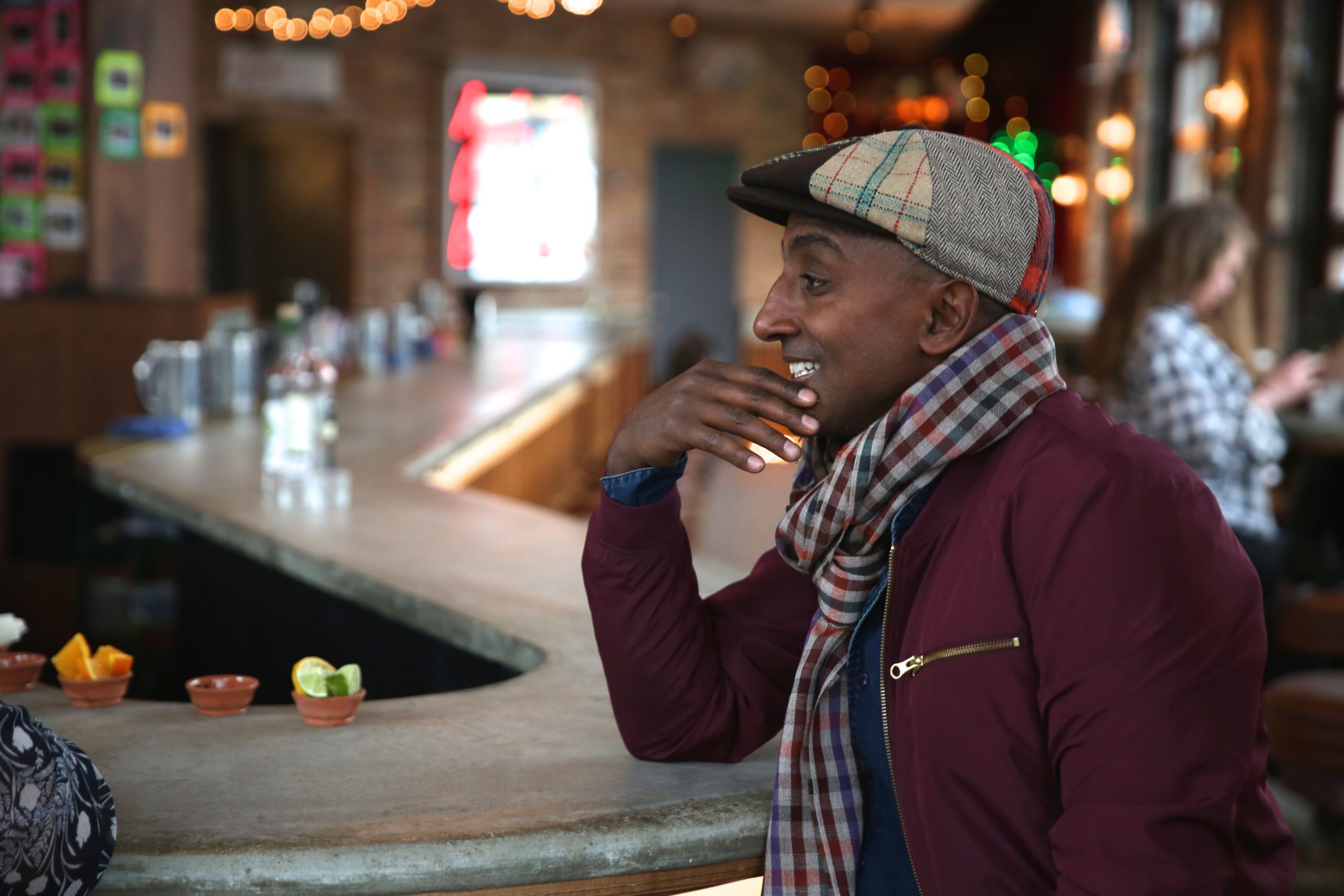 Having been a chef, with a trajectory many people have followed through the years, what keeps things fun for you?

Educating. We just took this morning with my young crew, all female, chefs of color, no one older than 25, super hungry, all they wanted to do is to show me the new dishes that they’ve created and pushing each other what should go on tonight’s special. If you’re not excited about that, you shouldn’t be doing what you’re doing.

Cooking was a very anonymous labor, came out of the domestic, and the two things you never saw was chefs of color or women, and for me standing at that intersection of working towards that, is just an amazing privilege. It’s something the we work hard for.

You’re talking about in your restaurant?

Yes. My work is about that, it’s about food, but it’s also about inclusion, whether that’s telling stories around immigrants and food, or whether that is opening doors for chefs of color. Those are the two different verticals that I work around.

When you’re in L.A., do you have any favorite places to dine or food shop at?

Many. I love L.A. as a food town, I love it. I love walking on a Saturday in the farmers market in Santa Monica. I’ve been lucky enough to do it with people like Jonathan Waxman or Nancy Silverton. It’s just a different feeling when you walk through with chefs. But then also I love the Thai food in East L.A. or incredible sushi that L.A. has, or Armenian food. These are the type of scenes that I don’t even get in New York, L.A. has another level of mom and pops that I just really love.

Is there anything you want KLCS viewers to know?

“No Passport,” we shot a lot of in L.A. we shot some at Grand Central market, which is probably my favorite spot in all of L.A. It’s just a celebration of America and go out and discover, be curious in your dining in your own city because you have a great city with good food, from San Gabriel Valley all the way down to South side, you just have amazing food.