History
Beginning in 1957, the Los Angeles Unified School District (LAUSD) produced televised instructional programming for students, which was broadcast on various Los Angeles television stations. A decade later, the District received state and federal grants to build and equip a broadcast facility, and in 1972 KLCS-TV was launched as the Los Angeles City Schools station.

You can watch KLCS over the air, on DirecTV, Dish Network, and most cable systems.

Coverage
Los Angeles is the second largest Designated Market Area in the United States. With our broadcast tower on Mount Wilson, KLCS’ coverage area extends from Ventura County to beyond San Diego, from the Pacific Ocean to desert communities.

Audience
Our diverse audience includes adults and children who live throughout Southern California, including LAUSD’s expansive community of nearly one million K-12 and adult students, their families, teachers and other employees.

KLCS’ original productions are seen in 53 markets outside Los Angeles.

Community Partnerships
Our community partners include other nonprofit organizations, educational institutions, local and regional government agencies, business associations and more. We work together to help make our communities vibrant, safe and healthy places for adults and children to live, go to school, work and play.

LAUSD BOARD OF EDUCATION

Upcoming LAUSD Board of Education Meetings

Station
KLCS-TV, The Education Station, is a noncommercial educational television station licensed to the Los Angeles Unified School District and is a member of the Public Broadcasting Service.  A multiple Emmy¬Æ Award winner, KLCS broadcasts to over sixteen million viewers throughout Southern California.  KLCS is carried on DirecTV, Dish Network, and all cable systems.

Mission
KLCS-TV is a multimedia education channel that inspires learners of all ages to higher levels of achievement and personal and professional growth through the use of programs and services that educate, inform, and enlighten.

Coverage Area
Broadcasting from Mt. Wilson, the KLCS coverage area extends from Santa Barbara to San Diego, reaching a potential viewing audience of over five million households in Los Angeles, Orange, San Bernardino, Riverside, Ventura, and San Diego Counties.  The Los Angeles DMA is the second largest in the United States and is comprised of over 16,000,000 people; a full 6% of the U.S. population.  The daily school audience includes over 1 Million LAUSD K-12 and Adult students and a staff of over 68,000 dedicated full and part-time employees.  KLCS instructional television (ITV) programming reaches over 150 school districts throughout Southern California.

History
The Los Angeles Unified School District (LAUSD) production of instructional television programming for in-school viewing in October 1957.  In 1963, LAUSD received the channel designation of UHF-58 . By the 1966-67 school year, the LAUSD was producing over 700 television programs per year for various broadcast outlets, and leasing airtime to televise 40 hours of instructional programming week, Monday through Friday.  The objective to achieve quality tailored programming and to provide in-school programs continued to grow.  Teachers and administrators who were impressed with the television medium’s effectiveness in enhancing the classroom experience particularly expressed their support.

On July 1, 1967, the District submitted an application to the State Department of Education and the U.S. Office of Education under Title III of the Elementary and Secondary Education Act of 1965, in order to build and equip an over-the-air broadcast facility its own.  This Act provided grants for the demonstration of innovative programs in schools.  In the summer of 1967, advocates testified before the FCC in Washington, D.C. on behalf of the District’s application for a unique instructional/educational Channel 58 franchise.  Speakers attested to the benefits that would accrue to the students as well as to staff, parents, and the community at large.  The District was subsequently granted a broadcast license for Channel 58 on March 3, 1972, and began broadcasting a single analog program stream on November 5, 1973.  The District’s success in obtaining the license for Channel 58 opened up a myriad of opportunities to improve instruction, in-service training, and cultural programming in particular, and to provide the community at large with an opportunity to acquire meaningful information about the Board of Education via the broadcast of its meetings.

Local Productions
KLCS continues to produce over original television programs throughout the year; more local non-news programs than any other station in Los Angeles.  Among the standouts in our local line-up is the perennial favorite, Homework Hotline, the Emmy¬Æ Award-winning, tutorial program for students, taught by National Board Certified teachers.  Other local productions include LAUSD Board Meetings, On The Record, an opportunity to hear from the Superintendent and other LAUSD Administrators about issues relevant to the direction of LAUSD, LAUSD Memo, presenting video bulletins with information for District stakeholders, Between the Lines, a weekly interview series featuring noted authors, and In Their Own Words, interviews with LAUSD policymakers.  KLCS also produces NewsBriefs, which highlights newsworthy events occurring throughout LAUSD. Additionally, special events such as the Video in the Classroom (VIC) Awards, the Academic Decathlon SuperQuiz and Banquet, Superstars Conference, Interscholastic Championships, Superintendent’s Address to Administrators, and College Prepared Career Ready are produced by KLCS.    LAUSD Staff Development Series produced by KLCS include The Teachers Hour, The Parent Connection, Teachers & Their Coaches, and Hollywood Homeroom – professional development series highlighting effective pedagogical practices and constructive use of video in the classroom.

Statistics
KLCS is one of only seven television stations in the nation licensed to a K-12 school district.

KLCS productions are distributed to 53 markets outside of Los Angeles

KLCS Magazine, a monthly schedule of evening and weekend programming, is distributed to all schools and offices and is available by subscription to Friends of KLCS members.

KLCS provides an extensive outreach program that includes hands-on workshops and the award-winning Video in the Classroom (VIC) Awards program.

KLCS provides Secondary Audio Program (SAP) capability, which enables Board meetings and other programs to be simulcast in Spanish.

Future
KLCS continues to seek the advice and expertise of the District’s learning community in helping to shape its role in the future.  Focus groups provide input in determining the most effective programs, schedules, and services.

KLCS will continue to: upgrade, reconfigure, and augment its technology to improve the design and production of its original series; increase the production of original, tailored programming to blend State standards and the instructional and professional development needs of the District; produce promotional videos and interstitial material highlighting KLCS programs and services.

KLCS continues to grow Knowledge Probe, a comprehensive digital content distribution model to LAUSD campuses, which enables teachers and students to access rich instructional media content directly from their classroom or library computers via data streaming so that individualized, tailored learning can occur.  Continued improvement of KLCS‘ multicasting and datacasting services will enable us to simultaneously enhance the educational experiences of our students; increase the resources available to our teachers; and provide even greater programming choices and interactive capabilities for general audiences in the greater Los Angeles community.

KLCS welcomes opportunities to partner with other television production and distribution facilities, multimedia designers, telecommunications providers, and other public and private agencies to meet expanding broadcast demands.  These partnerships will assist KLCS in the areas of program augmentation; revenue generating strategies including corporate sponsorships, donations, and grants; increased local and national viewership; and shared technological resources.

Esteemed Viewer, in response to the system-wide school closure by the LA Unified School District, KLCS will be modifying our daytime schedule. Beginning Monday, March 16, 2020, our 6 AM to 6 PM schedule will feature programs intended to provide students continued engagement opportunities with educational content. This schedule will be in-effect until school resumes and students are permitted to return to class.

For access to all your favorite PBS Kids shows you can tune-in to our Kids Channel: 58.2

To stream your favorite PBS programs at any time on any screen, consider downloading the PBS App and joining KLCS|Passport: https://watch.klcs.org/passport/learn-more/

Thank you for your understanding. 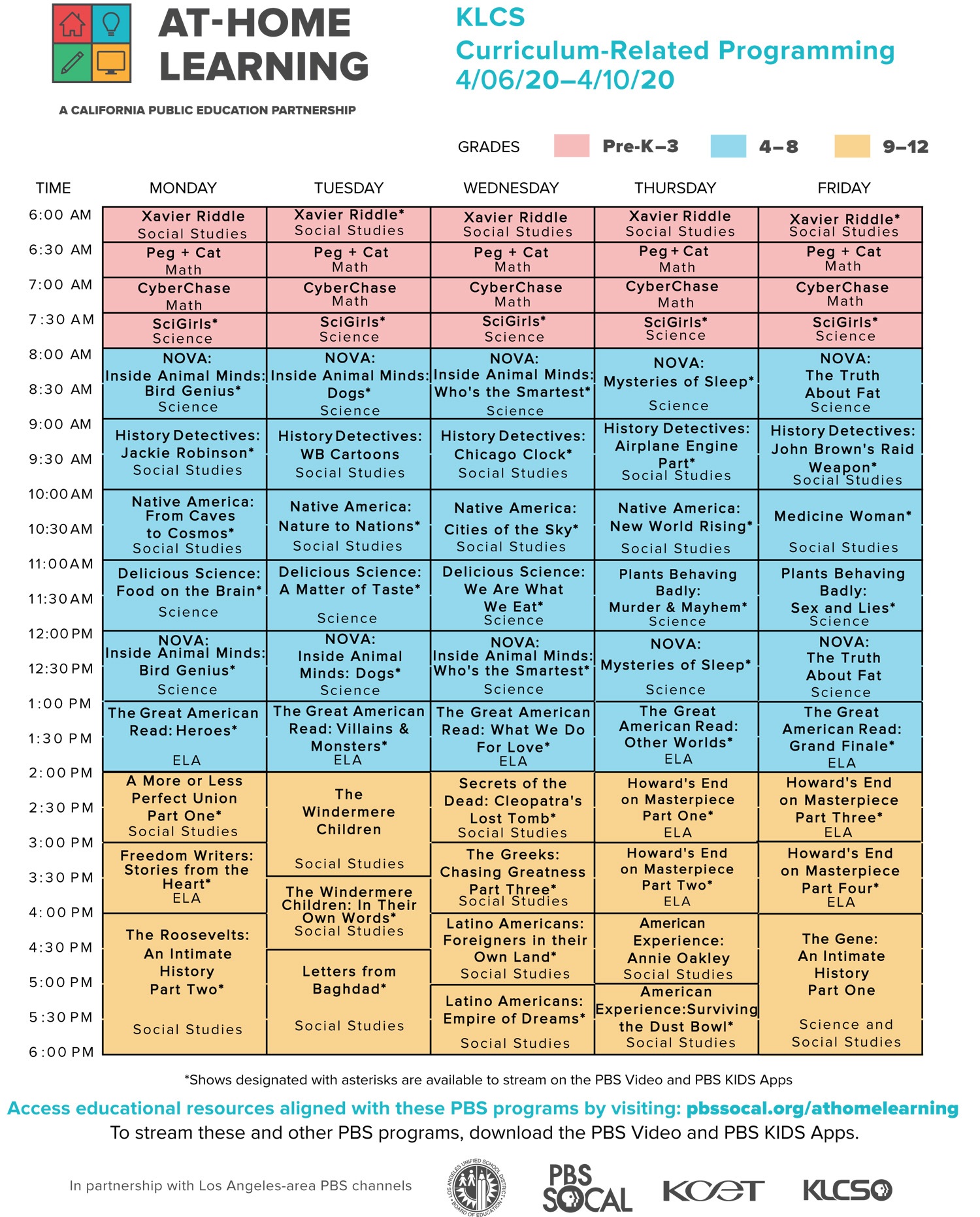